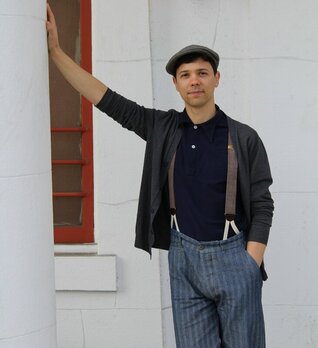 Damian Cade (he/his) began his dance training in the winter of 2008. His first and true love is Swing Dance; Lindy Hop, Charleston, and Vernacular Jazz are permanent residents in his heart. He studied Modern and Jazz Dance at the University of Washington where he received his dance minor in 2011. Since graduating he has continued his swing dance education at regional events, as a student, teacher, performer, and competitor. He began his tap dance training under Tabetha Clark, and has continued under Mark Mendonca. He has spent over 100 hours studying Alexander Technique with Cathy Madden, former chair of Alexander Technique International, and over 750 hours apprenticing under Kathlyn Hendricks, Ph.D., BC-DMT, and Gay Hendricks, Ph.D. as part of the Leadership and Transformation program.

Damian has been teaching for events and workshops since 2009, and locally at various studios in Bellingham since December 2015.
Photo credit: Chris Hazenberg
return to staff list