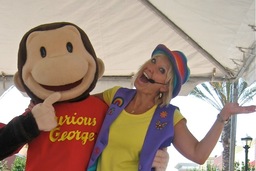 CHILD magazine calls her energy and enthusiasm “contagious” and named Dana as one of the “Top Five Kids’ Singers You Should Know”. Over the past twenty years, children across America have been singing, stomping, jumping and cheering as Dana has performed across the nation with her upbeat tunes and bubbly personality. Incorporating both familiar favorites and original songs from her five popular recordings, Dana’s dynamic performances stimulate imaginations, inspire interaction and introduce children to nearly every style of music. Dana’s classes at OPUS will draw on her performing experience as well as her many years leading story times for the Whatcom County Library System.

Dana's recordings have won numerous national awards and wide critical acclaim. She has received two coveted Parents' Choice Awards, and for four consecutive years, her recordings won the prestigious National Parenting Publications Gold Award (NAPPA) for best new children's music of the year. CHILD Magazine featured her "Sing & Swing-A-Long Tunes" and then her "Rock & Roll Fairy Tales" as the "Best of the Year”. Additionally, each of her recordings has received Dr. Toy's Best Vacation Product Award, and children around the world twice honored Dana with their votes, awarding her the Children's Music Web Award: Best Music For Young Children. Educators and the Early Childhood News named her a winner of the sought after Director’s Choice Award.

After obtaining her BA in Music & Theater, Dana began her career starring in Broadway musicals in regional and stock productions around the country. A gifted pianist and songwriter, she entertained for many years on the New York and European cabaret scenes. In 1994, she was inspired by the birth of her first nephew, Tyler, and began to focus her songwriting and performance skills exclusively on the young audiences with whom she has always felt a special connection. Buoyed by the success of her debut album, “Gather Your Dreams”, Dana made a commitment to bring high quality, meaningful and fun music to children and families.

Dana moved to WA state with her husband, Jason and son, Jack in 2002, where they found a little corner of paradise! Though she counts being “Jack’s Mom” as her primary focus these days, she still continues to perform nationally with PBS characters such as Curious George, Clifford and the Berenstain Bears in her new musical story time shows.


Please click the link below to view our one page brochure on Music Playground.